Blockchain is so much more than just technology that brought cryptocurrency to the world. Blockchain statistics show that this new tech could be the solution to age-old problems in almost all areas of industry, especially issues related to record-keeping.

While it can be said the blockchain is still in its infancy, the adoption and growth of the blockchain market is on the rise. Globally, it seems the race is on with leaders like the US, China, and Japan investing in thousands of patents, and crypto ATMs popping up all over the place.

While the future of this tech remains uncertain, this much can be said—it’s good to be a blockchain developer right now.

Blockchain has become so much more than the elusive technology that allowed Bitcoin to become the most popular digital currency. Now, it’s becoming a leading business tool that is set to transform the way companies perform and make a profit.

1. For 55% of senior executives, blockchain adoption is among their top five priorities.

While some executives are still hesitant about what blockchain tech can do for big and small businesses, more than half see it as an important integration to remain competitive on the market.

Blockchain adoption statistics show that this perspective is quickly growing, with just 43% of executives saying the same thing in 2018. In contrast, only 2% have no intentions of implementing blockchain and don’t regard it as a worthwhile investment.

The adoption rate of blockchain tech is growing at an astonishing rate. According to recent blockchain statistics, the forecasted CAGR for 2020–2025 is 67.3%. Notably, it’s predicted that by 2025, the market will increase by more than $36 billion.

There are two leading factors in the growth of blockchain: the need to simplify business processes and the need to improve data safety.

3. The average blockchain developer in the US earns around $109,000 per year.

4. 82% of supply chain companies plan on hiring blockchain-savvy staff in the next 12 months.

Supply chains benefit a great deal from blockchain due to its transparency and accuracy. Blockchain company statistics show supply chain organizations are eager to cash in on these advantages to enable more precise end-to-end tracking of goods.

Supply chain executives are aware that failure to integrate this technology may leave them behind the competition. A large 83% of them feel they’d lose ground on the market if they didn’t invest in blockchain integration. Many are already well on the way, with 84% reporting that blockchain is at least partially integrated in their organizations.

The global impact of blockchain is evident, and countries all over the world are finding ways to develop and implement this novel tech to solve complex problems. The distribution varies, but that doesn’t stop thousands of crypto ATMs from popping up around the world. 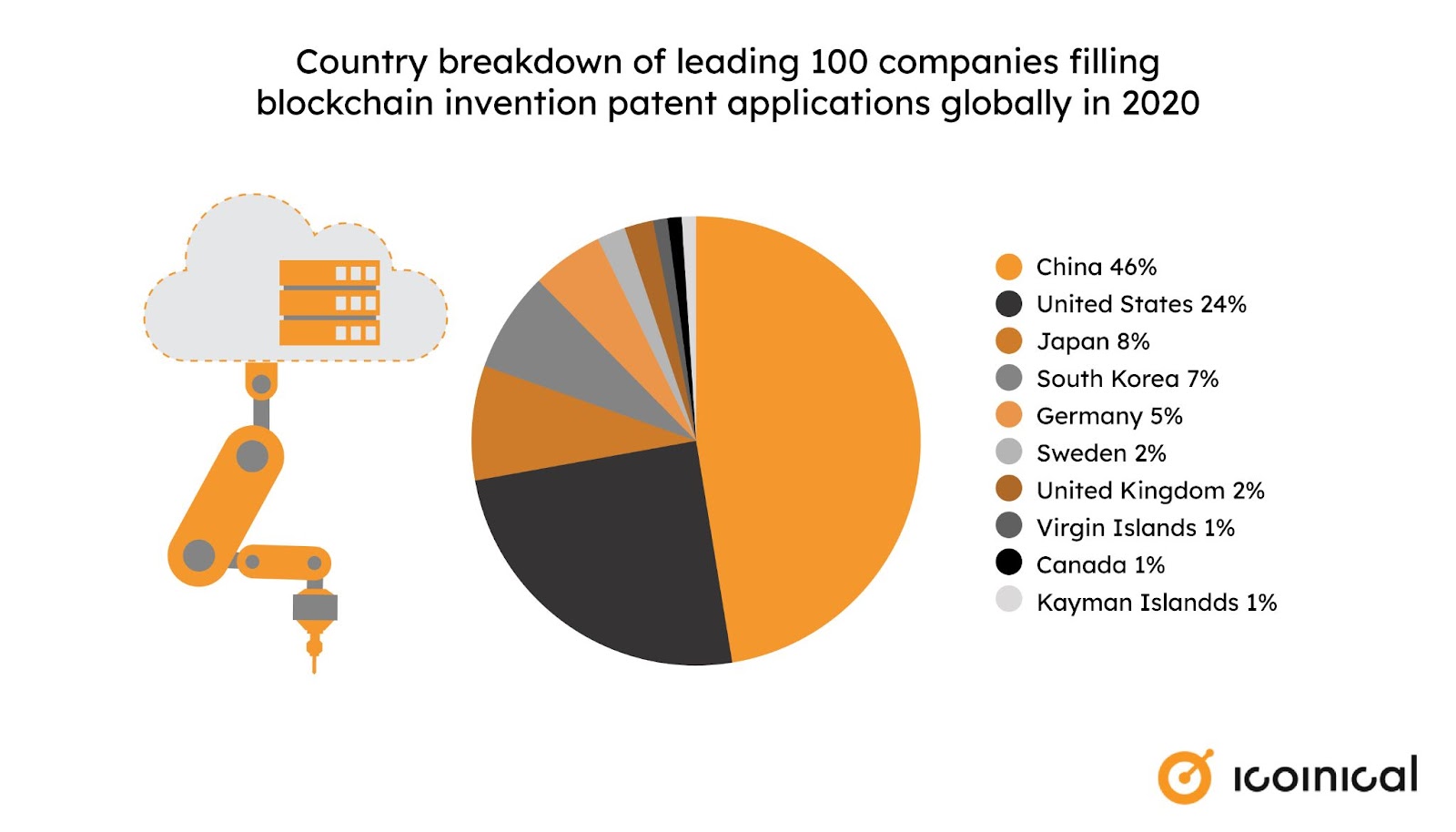 6. 0.5% of the global population uses blockchain.

Despite the buzz around blockchain and the cryptocurrency that it currently powers, it still hasn’t integrated as much as it may seem into the lives of everyday people. Beyond the specific niche of those constantly speaking about it, blockchain user statistics indicate that just a small fraction of the world’s population uses it, at least for now.

One of the greatest indicators of the global uptake of crypto as a valid currency is the emergence of crypto ATMs around the world.

A majority 87% are installed in the US, and Canada is a far second with 6.4% of the total number, according to current blockchain stats. European countries account for 4.4% of global crypto ATMs. Interestingly, China accounts for just a sliver, despite its major participation in blockchain tech innovation.

North America hosts almost all of the world’s crypto ATMs, but Los Angeles is the world’s biggest Bitcoin city by far. Chicago has less than half of the number (292), and Atlanta, Miami, and Houston follow closely behind.

Due to its novelty, some are wary of adopting blockchain for several reasons. Regulation is a primary concern for many industry leaders, while its ability to operate with other technologies is another concern. Despite hesitancies, growth seems inevitable, especially in the automation and IoT sectors.

9. 48% of industry leaders see regulatory uncertainty as the top problem with adopting blockchain.

Blockchain is certainly a revolutionary technology, but that might be exactly why many are hesitant to embrace it. The biggest challenges of blockchain, as statistics demonstrate, are industry-wide concerns about things like lack of trust among users and scalability.

10. 28% of global executives stated that system interoperability holds the key to success in blockchain adoption.

A massive obstacle in blockchain adoption is the lack of standardization in the technology. Without regulation, creating a network of blockchains that can interact with one another easily could be quite challenging.

This absence of standards makes interoperability between different pieces of blockchain software next to unthinkable on a grand scale, and almost 30% of executives agree with this statement.

Perhaps one of the most exciting applications of blockchain tech is the smart contract. In a nutshell, smart contracts are self-executing contracts that don’t need a central authority to be carried out.

Investors are well-aware of the impact smart contracts will have on sales automation. Blockchain funding statistics indicate that around a quarter of investors believe it will highly impact this sector, while more than half report its impact will be extremely high.

As IoT is more readily adopted, blockchain may be the solution to growing security concerns. Blockchain tech has the potential to decentralize security protocols in IoT networks, spurring the increase of blockchain adoption in IoT sectors.

The general adoption and growth of blockchain are undeniable, but certain industries are set to benefit more than others from this implementation. Namely, agriculture, retail, healthcare, and finance are keen to adopt this technology to solve age-old industry problems.

There is a myriad of reasons why blockchain tech will transform the agricultural industry. The most mentionable are the proper management of compliance, fair payouts, ease of recalling food batches, increasing customer loyalty, and easy vendor approval.

The blockchain food industry statistics show a 48.1% CAGR in the 2020–2025 period, indicating the integration of this tech is well on its way in this industry.

Blockchain tech is a seemingly perfect fit for retail as it enables real-time tracking and record-keeping. It facilitates faster communication in the supply chain and cuts down on delivery errors.

In 2018, the blockchain retail market was valued at $83 million but has expanded exponentially over the last three years. Recent blockchain retail statistics show that 15,000 US retailers will be using blockchain by 2023, representing a stunning 7,500% increase.

There is optimism for the use of blockchain in healthcare. Statistics report that the time and money this tech could save through improved tracking of drugs and health data has secured its presence in the future of healthcare management.

Back in 2019, this market was worth $5.4 billion, but experts project that the market for blockchain tech in healthcare will expand at a CAGR of 38.55%.

16. Blockchain technology adoption could reduce the costs of bank infrastructure by 30%.

Blockchain has the potential to drastically cut down the operational costs of investment banking and, as a consequence, portfolio tracking. Some predictions indicate that the integration of this new tech could save billions of dollars.

Blockchain made its name through cryptocurrency, revolutionizing the world of global finance. While the markets are still volatile, it seems that the world is ready to accept what this technology has to offer in terms of securing a completely digital and decentralized currency.

As Bitcoin grows in both value and popularity, the blockchain that powers it is the lifeline allowing it all to take place. The number of Bitcoin transactions per day fluctuates a great deal from one day to the next, but numbers easily reach hundreds of thousands on a regular basis. With each transaction confirmed through the blockchain, Bitcoin is the number one thriving example of how blockchain works.

18. There are currently over 18.8 million bitcoins in existence.

Bitcoin has a predetermined amount of 21 million. Around 89% of that amount has already been mined, and blockchain mining statistics show that the average amount of bitcoins mined per day in 2020 was 900. At the time of writing, around 2.2 million BTC remains to be mined, and the last Bitcoin will be mined in 2140.

Ethereum is the second-largest cryptocurrency in the world. In September 2020, one Ether was worth $470, and one year later its worth was around $3,200. Despite its lower value than Bitcoin, Ethereum sets itself apart from the latter by providing a platform for creating decentralized applications and smart contracts. Ethereum blockchain statistics show a rapid, though still gradual growth in market cap since the start of 2021.

20. Bitcoin constitutes around 42% of the total cryptocurrency market share.

Bitcoin rules crypto, for now, constituting almost 42% of the market share, according to blockchain stats. Ether is a far-off second, accounting for just 19% of the market. Studies indicate that it’s still too early to speculate on the future of crypto, as all crypto coins have their own limitations.

For example, Bitcoin suffers from scalability. As the number of users who join its blockchain increases, the amount of time it takes to confirm transactions on the Bitcoin blockchain gets longer and longer.

It seems that while there is still some hesitation, blockchain technology will revolutionize every facet of our daily lives. Its adoption may still be in the early stages of development, but statistics show that most people and professionals are willing to adopt this new technology over the next five years.

Blockchain applications extend far beyond cryptocurrency. This technology is set to completely change the way our governments, healthcare, consumer industries, and educational systems function—most likely for the better.

How much money can blockchain save?

The estimation of how much money blockchain can save is unpredictable, although by looking at specific industries, it can be projected that billions will be saved by implementing this type of tech. For example, according to one study of investment banking, the implementation of a blockchain saved $8 billion, almost 27% compared to a non-blockchain model.

How many blockchains are there?

There are currently thousands of blockchains, but we can classify them into the following categories:

Public blockchains have no restrictions to access, whereas private blockchains need permission from network administrators to gain access. Hybrid blockchains are a combination of the two, while consortium blockchains consist of several different organizations.

Satoshi Nakamoto invented Bitcoin in 2009, which is the first practical use of blockchain tech. That said, blockchain was introduced in 2008, while similar concepts have been around even earlier.

How many blockchain users are there?

An estimated 0.5% of the world’s population makes use of blockchain in one way or another. In raw numbers, that’s 39,500,000 people. It’s predicted that as major concerns about this tech are addressed, such as regulation and scalability, its adoption by the general population will drastically increase.

What is blockchain worth?

The worth of a blockchain is hard to pin down, mainly because not every blockchain network is the same. In some cases, it has proven quite valuable, making it an intriguing prospect for software developers.

Most inquiries into blockchain have been surface-level since it’s such a novel technology. With enough investment and fine-tuning, blockchains could prove to be of great value.

Why is blockchain expensive?

A blockchain system can prove expensive to build for a variety of reasons. First, there’s a shortage in the supply of blockchain developers, and as such, their services tend to be on the more expensive side. Second, the nature of blockchains makes them expensive to manage. For instance, blockchains need multiple agents to mine blocks of data, which can be time-consuming and require immense amounts of computing power.

Granted, the price of a blockchain project depends on its scope, so it’s all relative. Most blockchain statistics point to a blockchain being more expensive than a legacy system of comparable size.

Ads Disclaimer: This site may contain links to Google Ads’ operating network and we may receive commission for any clicks made by you on these ads.